I seem to be OK now. Just in case, I finished up the cheese for breakfast. We left the hotel and were on the road by 9:15. 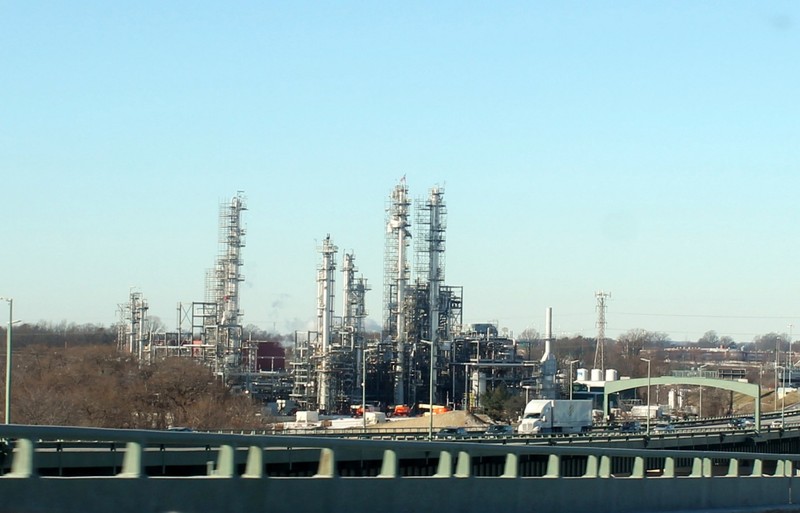 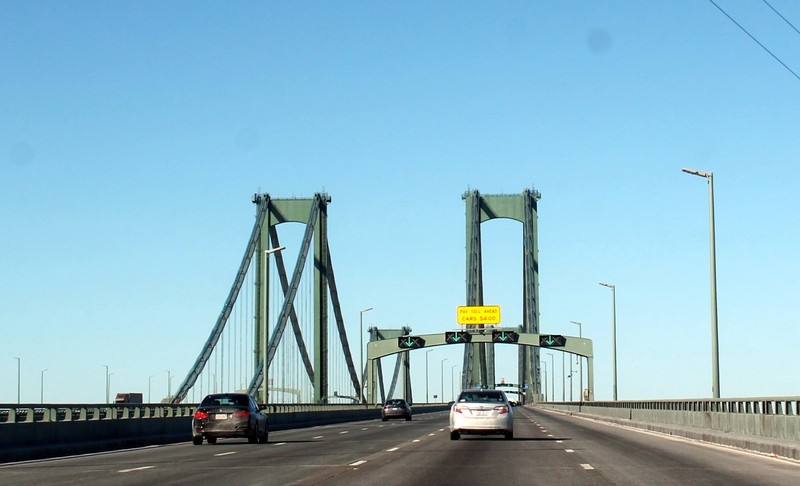 Bridge in the daytime

We were on pace to get home by about 1300. We crossed the Delaware Memorial bridge at 10:30, and were going through Middletown before 11:00. 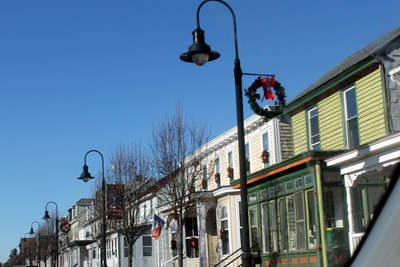 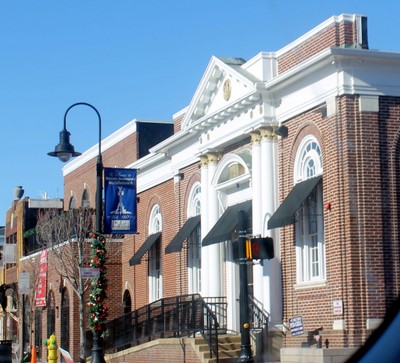 We were both wearing our seat belts, and the GPS and phone were both attached to the car. I had not put the GPS on the dash because when I am wearing a seat belt I couldn't reach the little beanbag that it sits in on the dashboard without undoing the seat belt. When we got on 301, I figured I did not need to watch where we were going, so I got out my Kindle and was reading.

When we got to Annapolis, we were going to get off 301/50 and go down MD 2. At West Street there is a light. We were the third car at the light. The light was green for us, and the two cars in front of us went through the green light. I looked up as a white Ford F150 sped through on West Street (going West). We weren't going fast, but we were right close to the light and Bob swerved to the left and braked, but we were too close and we collided. 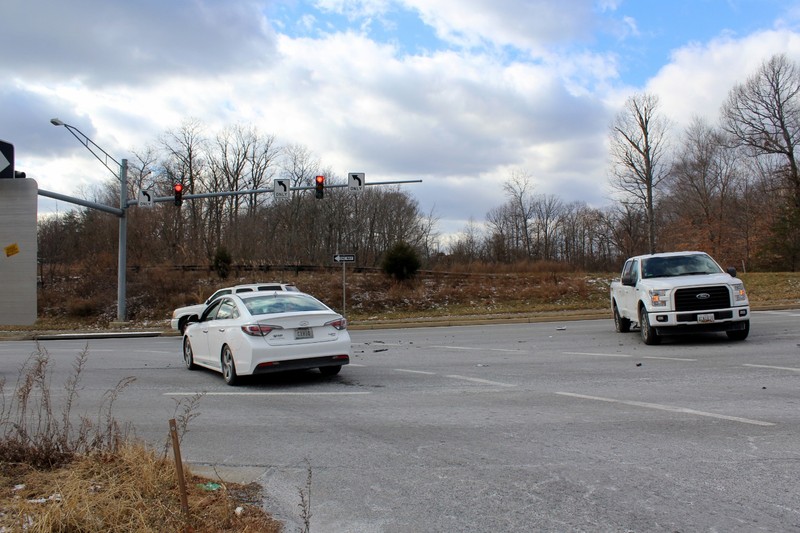 The airbags went off. We sat there. stunned for a minute. I got my phone and called 911. They asked me where I was and I said I didn't know - that I was somewhere in Parole. The 911 people said they knew where I was and asked if there were any injuries. Bob had gotten out of the car. Someone came over to my side and asked me if I was hurt but I couldn't open the window with the car off and my door was kind of stuck so I could only open it a little. Bob said that the fender on that side was pushed back into it. 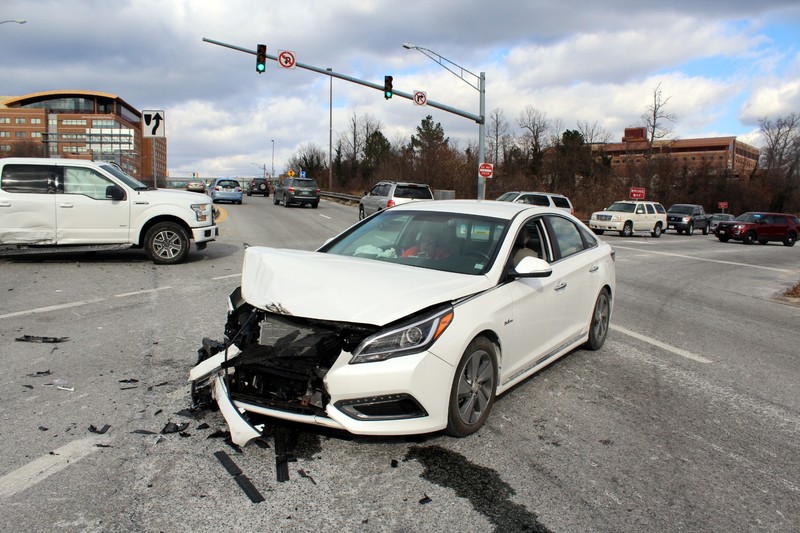 Scene of the crash

I asked if the other driver was OK and was told that he was. There was a man standing there in between the two vehicles (we had spun the Ford around to it was pointing north and it had a flat right rear tire and some body damage in that area. The man said for us (Bob) to get back in the car as he would be safer there.

A lady came and gave us her card and said if we needed a witness that she saw him run the red light. I'm thinking that she was in a car behind us and maybe the man was with her. 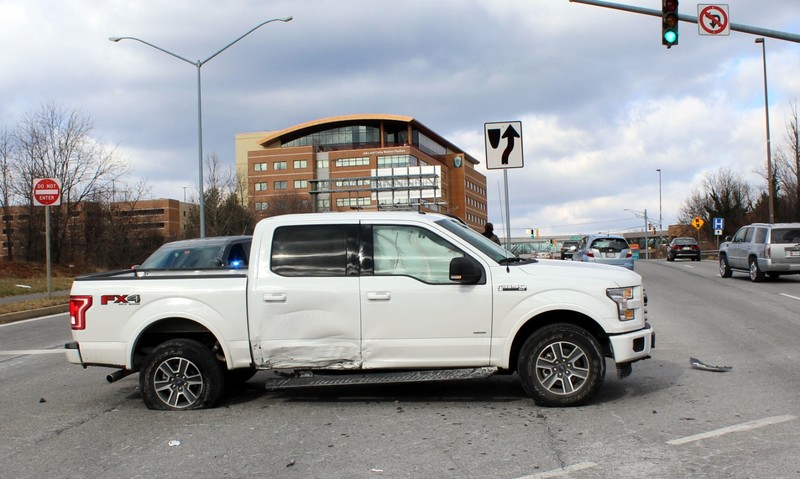 The police arrived and they put a car on our left with flashers on and also at least one fire truck and some EMTs. Someone pulled the fender off my door so the door would open and the EMT talked to me. I said I was fine. Bob said the other driver never got out of the truck but that his wife was there (??).

They called a tow truck and the police gave me the receipt for the car but said that they were closed and couldn't get the stuff out of the car until tomorrow and they asked what our plans were, and Bob said he didn't know. In the meantime, I had for some reason decided to call Jean (the cat sitter), and then I messaged my kids on FB from my phone. And then I called Progressive to file a claim. By then I had gotten the police report with all the information So people were then calling and the insurance lady asked what time the accident occurred and I accidentally hung up on her when I turned my hand over to look at my watch (I was holding the papers in my right hand). Our daughter D called and asked why I didn't call her for a ride.

The police allowed us to get our suitcases, and then my scooter out of the car before they took it away and then put us in the police car and tried to find an open car rental place, but none of the ones there were open. So he took us to the south district Anne Arundel county police station. He looked at me and said I had a bruise and swollen place on my left cheekbone. I couldn't see my own cheek and his visor with the mirror had a lot of stuff on it so I used the phone to take a selfie to look at myself, but I couldn't really tell. But I do have a little bruise there 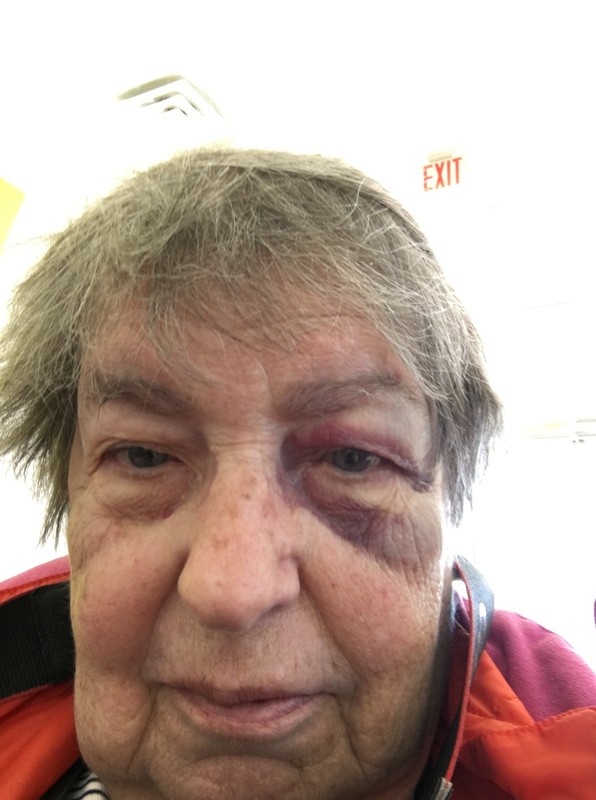 My black eye the next day

On the way I called our daughter D back and said yes we needed a ride and the policeman told her where the station was. It was warm inside the station, but I could not get a signal on the phone at the police station - I had to go outside. D suggested that we rent a car from BWI which is open 24/7. So I did that.

D got there and we loaded our stuff in the car and then Bob said that his pills were in the cooler, so we went to the tow truck place and I called the number on the piece of paper I had and said that Bob had left his pills in the car (although after we called, he said that he remembered putting them in the suitcase, but the scooter charger was still in the car). She said that she'd send someone to let us in and it would be about 20 minutes. We sat on the street and talked

The tow truck man came and D and Bob unloaded stuff including my cane and the kindle and the GPS and the cooler etc. While they were doing that I called Jamie at the Hyundai dealership that we had bought the car from and said we'd need a replacement. She said the 2018 hybrids are not out yet.

Then we drove to BWI. Bob and D went in - the Hertz lady had said a Ford Focus but she had not put down that it was a one-way rental. While they were in there I got an email on my phone that said I could check on the claim on their website, but I absolutely could NOT log on from my phone as it refused to take any passwords.

Bob and D came back with a Ford Fiesta which D said was tiny, and we did manage to get all the stuff into it. And we drove down to Leonardtown. Bob seemed a little shaky and he said he was having balance problems, but he refuses to admit that he's sore in any way. We stopped at KFC and got dinner to go and then he unloaded the car, and petted the cats (the ones you can pet). I turned the modem on. When I left the DSL line was not working and we got a message from Verizon on the phone (Monday) that said it was OK. and it was.

I managed to log on to Progressive but nothing is there yet. I still don't know if they have authorized a rental car for the accident [They didn't] I downloaded all the photos and we looked at the mail. The new battery for the phone upstairs came while we were gone, so maybe it will hold a charge long enough for a long conversation.

Then Bob said that the hot water pipe was frozen. Just up here in our bathroom - it is OK in the kitchen. He couldn't find the heat lamp, but he turned up the heat downstairs and put a fan to blow into the coat closet under the stairs.

I do have a bruise on my cheek - probably either the kindle or the GPS flew up and hit me in the face - bent my glasses so that when I leaned over, they fell off. 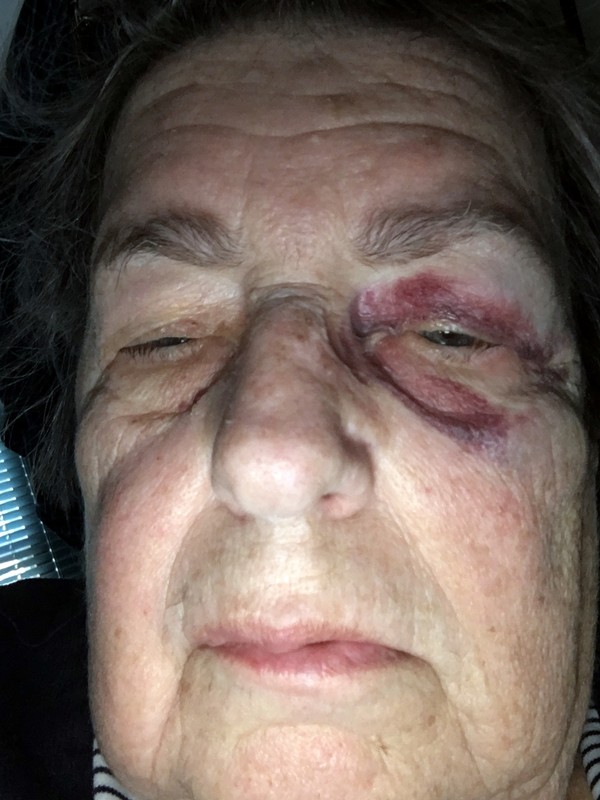 I bent them back. And my right shoulder is sorer than usual. When my mother had her accident, she was wearing her seatbelt under her arm to keep it from cutting into her neck and she had some bruises on her ribcage. But I was wearing the camera vest and the seat belt was over it. The camera kept the seatbelt from riding up too far and I think the camera vest distributed the force over a wider area. I can't tell whether Bob is feeling sore or not. He says not.

We rented a car down here, and drove up to BWI and turned in the Ford Focus. We went to the impound lot and got all the rest of the stuff out of the car. 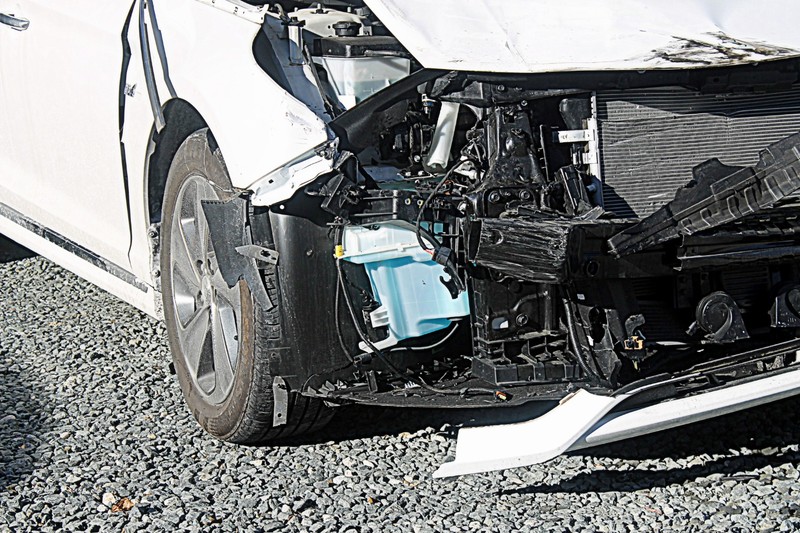 Front of the car in the impound lot

The insurance company gave us the full value of the car, so we bought a 2017 hybrid with that money plus some savings.

My next trip was not until June when I took my youngest granddaughter to Tanzania.

Posted by greatgrandmaR 17:30 Archived in USA

Comments on this blog entry are now closed to non-Travellerspoint members. You can still leave a comment if you are a member of Travellerspoint.

If you aren't a member of Travellerspoint yet, you can join for free.